A friend wrote to me, both in response to something I said about having tried to find my way among the Seventh-day Adventists and a news item about Muslim women choosing to wear the head covering: "I totally don't understand making a choice to fit into a community that limits one's ability to grow, make choices, enforces submission for some over others. Does submission become a comfortable habit? Or is there a sense of safety and freedom in not having to make choices/take responsibility?"

The thing that I see emphasized in what I have been reading is that submission is a deliberate choice, made each and every day (and several times a day, some days--being neither a comfortable habit nor freedom from responsibility). Many religious writings, Quaker included, talk about submission to God being a conscious giving of oneself to God and giving up of one's ego-driven will--a deliberate and constant seeking for the inward "still small voice"--tempered by the community also seeking the will of God. So how we define "submission" varies! Some religious groups believe that women must submit to their husband's decisions. Yet liberal Quakers do not (nor do Adventists seem to). Wearing the head covering in conservative Christian and Jewish groups, along with wearing plain clothing, is seen as part of both following God's law and maintaining the sense of community. Maybe this is true also for Muslim women? And as with families--when one member is attacked by an outsider, isn't it usual for the others to show solidarity and a united front? Wouldn't re-claiming a visible identity be part of that?
Posted by Kim Ranger at 2:29 PM No comments: Links to this post

I'm still reading Amish "inspirational fiction" and am glad that as a non-Amish woman, I am able to speak my mind, wear pants, fly on airplanes, pray however I want, not have to cover my hair, have electricity in the house, have a driver's license. Regarding the last: now illegal immigrants will not be able to get a MI driver's license. I wish someone could explain to me how that is a good thing. Will the immigration laws be eased and the process sped up, or will we simply have more unlicensed drivers, who if discovered, will be deported?

On the work side: just finished up adding to our Arabic literature collection (children's books in Arabic; adult literature in translation). I was finally able to "blow up" the Arabic script enough in the website and my Excel file to match ISBNs with titles & authors (in Arabic script & transliterated but not translated), which was quite a puzzle.
Posted by Kim Ranger at 2:43 PM 2 comments: Links to this post

On Jan. 1 (2008), the New York Times had a column called "The New Year's Cocktail: Regret with a Dash of Bitters" by Benedict Carey about reflecting on our past experiences and the process of maturing as adults, which I found very thought-provoking. Emotionally healthy folks tend to look at what was gained in past situations when they might have chosen differently were they to have that choice again at the present. I guess it's a reminder to see god/the good in situations instead of spending energy in blame or regret, and to look at the bigger picture.

For example, had I gotten a job other than the one I have currently, I probably would not have had the energy to make a marriage--and this is a relationship I cherish more than any other. I'm inexpressibly grateful every day for A.

And I get thanked in my job fairly often, e.g., today I received this: "What a thoughtful email and helpful service you are offering! I am not sure if my students will be able to use Library helps as it's a skills class, but I was really impressed with the potential of the resources you suggest. Have a great semester. Thanks for all you do, [X]." Whereas I can imagine fielding many more complaints with fewer rewards if I were in any of the other positions I had applied for in the past 3 years.

I had a fairly quiet and quite restful holiday: I got to read a lot while eating fudge and cookies and watching the bird life at the feeders, walk in the woods, and cross-country ski.

OK, enough PollyAnna--those of you who know me know I'd rather complain than breathe some days! So I'll get back to it now--anyone passing by who'd like to stop in for some "blue air"?
; )

Posted by Kim Ranger at 11:40 AM No comments: Links to this post 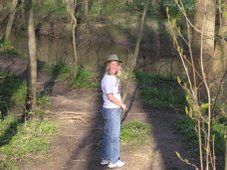